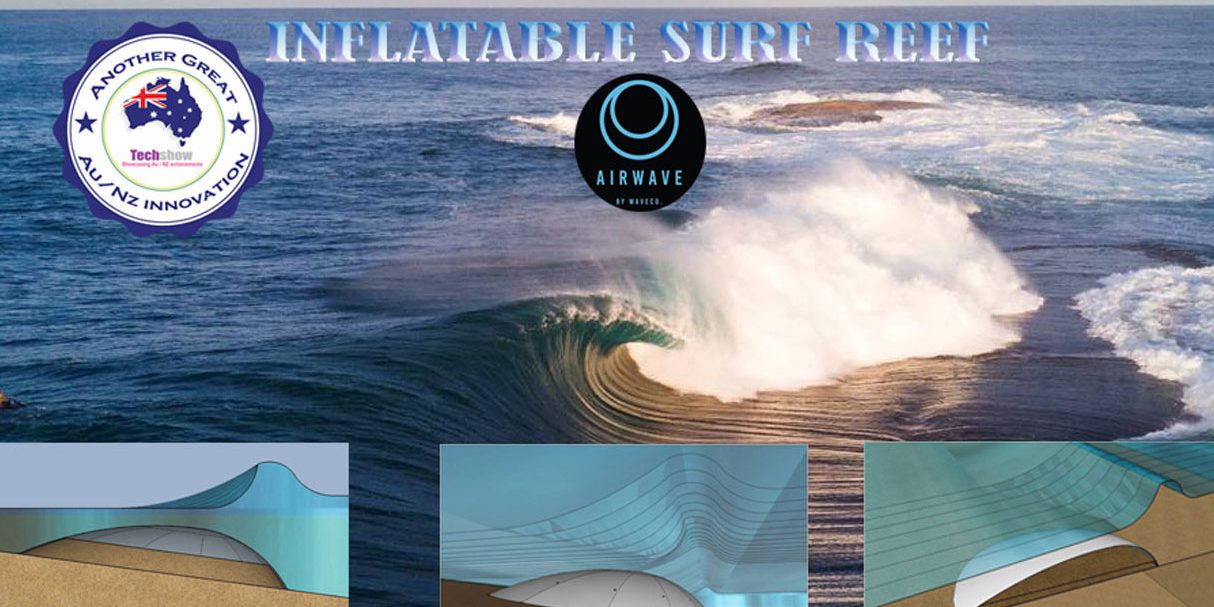 There are thousands of miles of coastline where mother-nature already does half the work ie; provides swell. ‘Airwave’, inflatable reef concept has the capacity to radically transform the way surfers interact with coastlines. In a nutshell, the Airwave is a self-anchoring, inflatable dome that can be installed in under two days. The Airwave, ten years in development, could transform a long stretch of closeouts into a dreamy playground of barrelling A-frames. The cost of a single Airwave unit is approximately US$350, 000. The world’s first Airwave is due to be installed in the Western Australian town of Bunbury in November 2019. 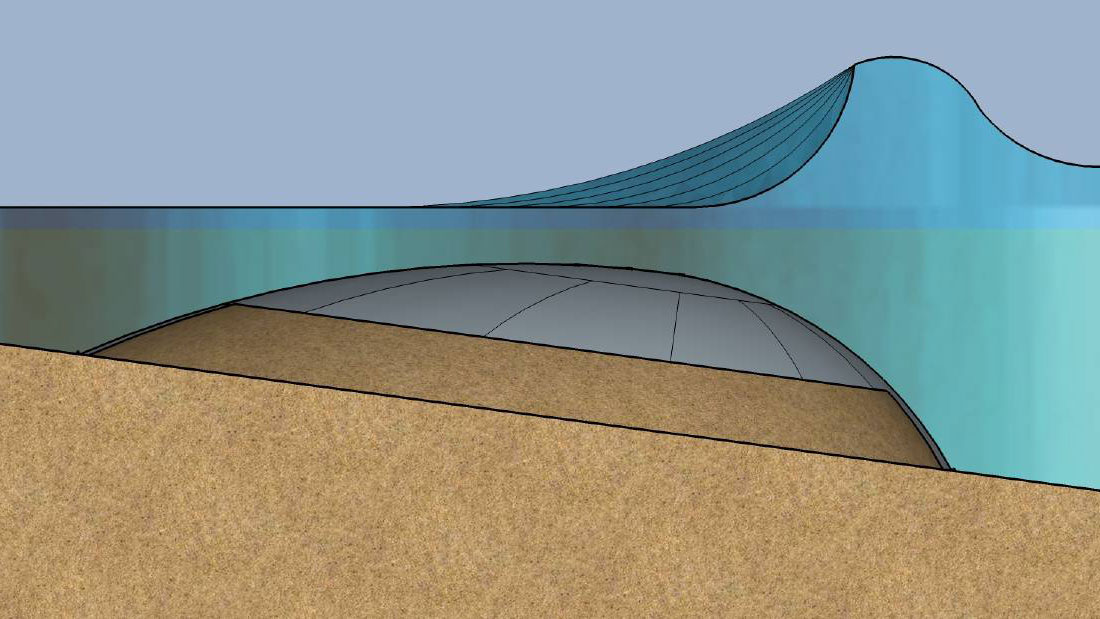 The most important consideration when designing the Airwave was that it had to have nil or minimal environmental impact. That was the most important design parameter. The first test shape will have a 12 metre, perfectly circular base and the overall shape, is a very subtle, flattened dome with a steeply angled back. The abruptly angled, curved rear surface, rising to approximately two metres in height, provides the ‘reef edge’ effect, slowing the front edge of the swell, therefore causing it lift, fold over and turn concave. This action on the incoming swell also creates a concave and tapered wall effect within the swell line, which ‘horseshoes’ around the AIRWAVE. From the highest rear point the Airwaves slopes gently towards the beach to provide a smooth path for water returning from the beach. Looking across the Airwave’s front from the beach, the curve is also flattened and very subtle, to minimize the disturbance to cross shore sand flow. The subtlety of these curves is very important in the way the Airwave interacts with the sand environment. The Airwave is self-anchoring. It’s partially filled with many tonnes of sand and it’s base has a large circular footprint, making it extremely stable even in substantial storm events. 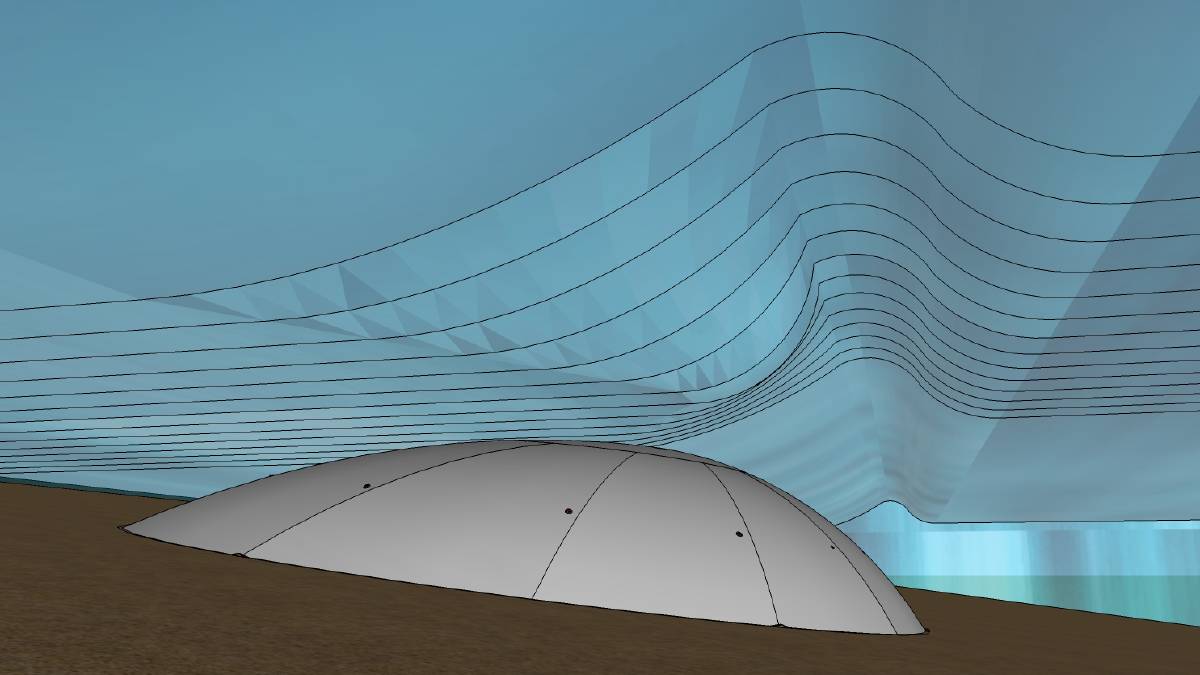 The Airwave is actually designed to work very well in a variety of swells. The shape and wave peel characteristics would be swell and tide dependant. On smaller swells and across different tides, mellower, tapered walls will be created. On smaller swells and medium tides, dads and mums can have fun with the kids. On larger swells the wave would be faster breaking and hollower, suitable for expert surfers. 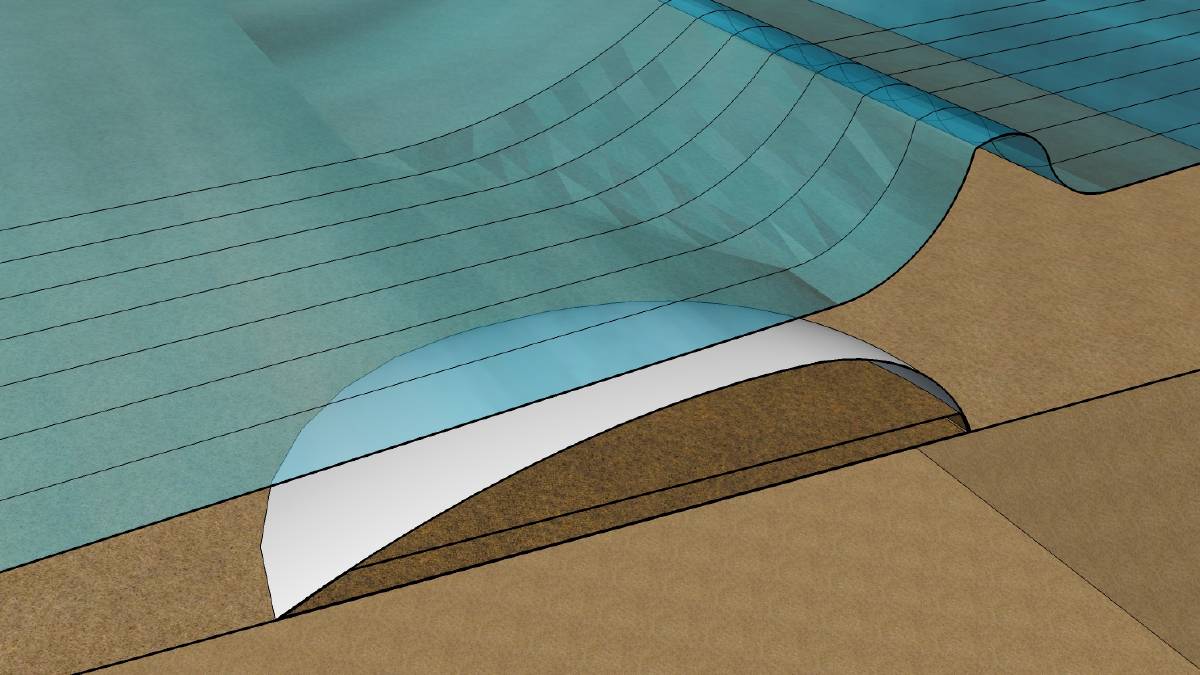 The Airwave will most certainly barrel and across a fair range of swell sizes too. I don’t think it would be great to design a reef that didn’t have the potential to create barrels. The Airwave is a relatively compact structure, and is installed in quite shallow water. It causes the swell to break in both directions from one well-defined take-off point.
Many previous artificial surf reefs have failed to deliver quality waves and for a variety of reasons. The difference with the Airwave is that we haven’t tried too hard to over engineer or ‘force’ the wave to break along a long edge, as in typical ASR’s of the past. The Airwave merely lifts and peaks the swell just before the shoaling point, creating a convex peeling wall. The newly angled swell and increasingly shallow water does the rest.

Waveco have completed several scale model Airwave tests, in both confined fresh water bodies and in shallow water ocean tests. Scale has been around 1:20. The scale tests have shown conclusively that making the ‘swell’ peak and break in one spot, in shallow water, produces a concave wall that peels evenly through to the shore. Although these tests are very encouraging, it is now time to test at full scale.

The Airwave is simply a single air-filled dome, which mimics a shallow, well placed sand bank. Site selection, the swell profile of the site and depth placement can certainly be managed to produce more critical or mellower waves. A combination of both types can be installed on the same stretch of beach.

We are still working out what the exact cost for a single unit will be and this will become clearer after testing shows us any subtle design changes that are needed. At this stage US$350k would be a good estimation. At that price they would be the approximate equivalent of one twentieth of the cost of a conventional ASR. To put it simply, for the cost of one conventional (Artificial Surf Reef) ASR, you can have twenty Airwaves.

Airwaves also lend themselves to multiple installations along the same stretch of beach. In just two weeks, weather permitting, 6-10 Airwaves could be installed. Every bay in every country in the world is a potential site for a multiple Airwave installation. There are thousands of potential sites with enough swell to warrant some greatly improved wave shapes. Because of the speed and relative simplicity of the installation process, the possibility of placing many thousands of inflatable surf reefs around the world, in a relatively short space of time, is real. In the future Airwaves can be also be designed to fit into to gaps in reefs to improve the peel characteristics of existing reef breaks.

Surf overcrowding is reaching chronic levels and is not being alleviated by the existing artificial reef industry. Surfers are still craving the meditative experience that only a small group of mates out surfing can bring. Kids need to have more safe surfing options also.