The inflatable reef concept that could turn coastlines into surfing theme parks.

Electrician Troy Bottegal was sitting in the bath after a surf when he literally had a lightbulb moment. His most recent foray into the ocean had been particularly disappointing. Despite the presence of plenty of size, the waves had been formless and uninspiring – line after line of what surfers commonly refer to as closeouts. A classic wave will offer a tapering wall of blue; a blank canvas upon which a surfer can glide along, carving and cutting into the clean face with a sequence of flowing manoeuvres. By contrast, a closeout is little more than a useless flop of dumping white-water that offers the surfer barely enough time to get to their feet and then little more than the opportunity to go straight. The closeout is the surfer’s curse.

Sitting in the bathtub Troy dreamed of a way of turning closeouts into perfect waves. When he looked up, he found inspiration from an unlikely source.

“I stared up at the oyster light fitting above the bath and, pop, in came the idea,” he recalled. “Next minute I’m straddling the bath, taking down the domed light fitting and subsequently spent the next half hour pushing waves towards it.”

The bathtub epiphany triggered an obsession with the concept of artificial surfing reefs (ASRs). Troy began wading through the academic research on  ASRs, talking to professors and coastal engineers, and surveying surfers about the characteristics of good waves – all in his quest to transform potential closeouts into shapely, rideable waves.

The science behind waves and ocean-floor topography (bathometry) is multi-faceted, but as a general principle waves break when a swell moves from deep water into much shallower water, over a sandbank, rock-  shelf or reef. As this transition into shallower water takes place the bottom or front edge of the wave slows down, causing the top of the wave to overtake it and topple over – a bit like the way a top-heavy rugby player will come tumbling down when tackled hard around the legs. A wave will usually begin to spill or break when it reaches a water depth 1.3 times the wave height.

Over the last decade Troy has refined his idea for an inflatable structure that can be easily dropped into the ocean to serve the purpose of a reef. After teaming up with a group of engineers, the design he dubs ‘Airwave’ is now at a stage where it’s ready for a fully-fledged ocean test. 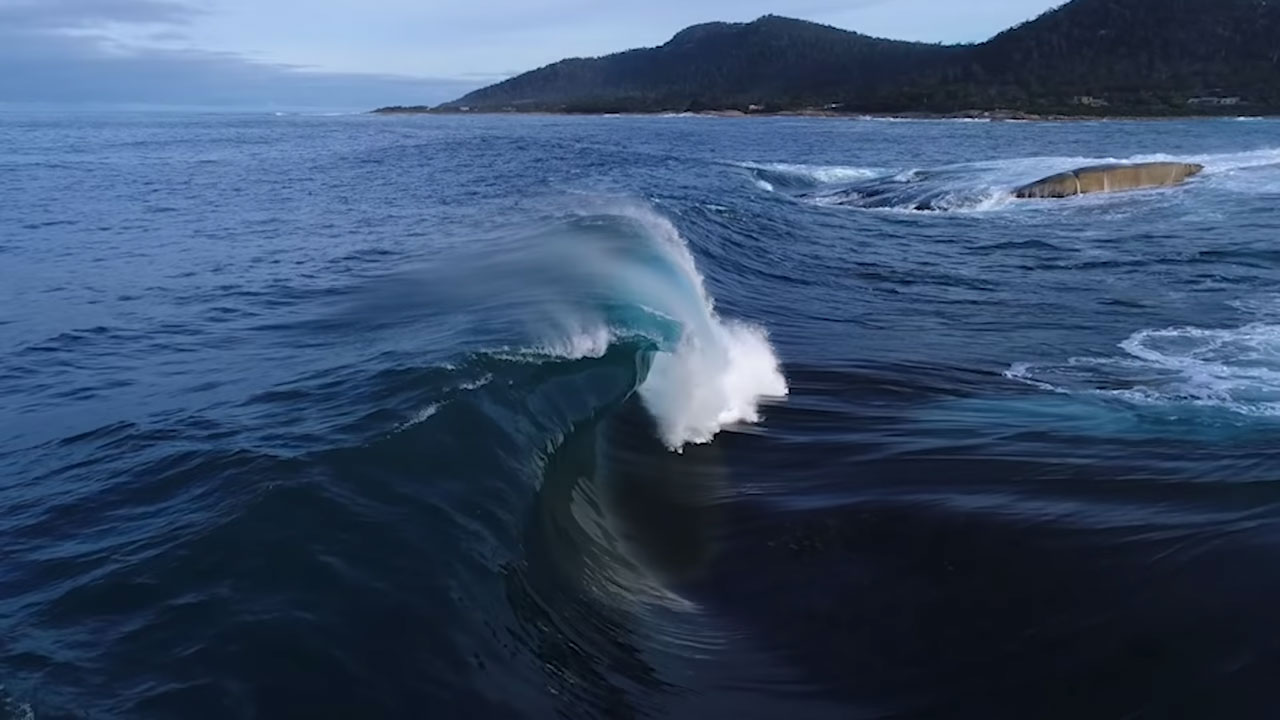 “In the first test Airwave will have a 10-12 metre, perfectly circular base and then the shape overall is a very subtle, flattened dome with a steeply angled back,” explained Bottegal. “The abruptly angled, curved rear surface, rising to two metres in height, provides the ‘reef edge’ effect, slowing the front edge of the swell, therefore causing it to lift, fold over and turn concave. This action on the incoming swell also creates a concave and tapered wall effect, which ‘horseshoes’ around the Airwave. It causes the swell to break in both directions from one well-defined take-off point. Consequently the Airwave is characteristically a bowling a-frame, which then produces a concave wall peeling to the beach.” 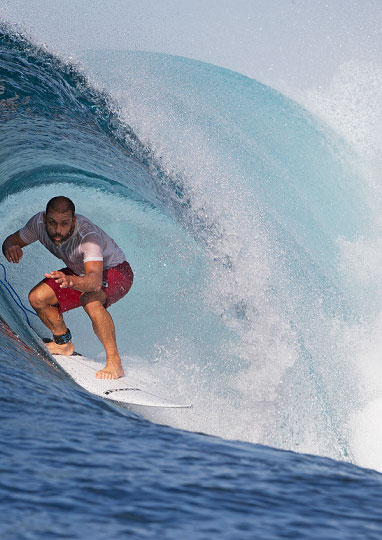 Troy wasn’t the first to come up with the concept of an artificial ocean floor or reef that could create desirably shaped waves for surfers. They’ve been trialled unsuccessfully at Taranaki and Mt Maunganui in New Zealand, and Bournemouth in England. Meanwhile, the ASRs installed at Cables Reef in Perth and Narrowneck on the Gold Coast enjoyed more success. Troy suggests his Airwave concept is markedly different and much simpler to build and implement.

“The difference with the Airwave is that we haven’t tried too hard to over-engineer or ‘force’ the wave to break along a long edge, as in typical ASRs of the past. The Airwave merely lifts and peaks the swell just before the shoaling point, creating a convex peeling wall. The newly angled swell and increasingly shallow water does the rest.”

Troy’s also confident the Airwave, made from super-strong, salt-water-resistant rubber can hold its footing in heavy seas.

“The Airwave is self-anchoring. It’s partially filled with many tonnes of sand and as its base has a large circular footprint, it will be extremely stable even in substantial storm events,” he explained.

Some might also be quick to question the environmental impact of the Airwave, but Troy is adamant he’s used materials and methods that won’t have any negative consequences.

If you’re going to go to the trouble of building a massive rubber sculpture and dropping it in the ocean you want to make sure the idea has merit. In order to test the validity of his concept, Troy has conducted experiments with scale models in both freshwater and saltwater settings and suggests the results give him every reason to believe it will work on a bigger scale.

“The scale tests have shown conclusively that making the ‘swell’ peak and break in one spot, in shallow water, produces a concave wall that peels evenly through to the shore. Although these tests are very encouraging, it’s now time to test at full scale.”

Gliding behind a curtain of crystalline salt-water is a unique experience and many spend their lives devoted to chasing hollow waves. Troy believes his airwave will put surfers in the tube.

“The Airwave will most certainly barrel, and across a fair range of swell sizes too. I don’t think it would be great to design a reef that didn’t have the potential to create barrels.”

It looks like Troy might get his shot at playing wave creator. He now has approval from Bunbury council in Western Australia to install one of his dome-shaped inflatable reefs at Back Beach, Bunbury, next January, and recently launched a kickstarter campaign to secure the necessary funding. To cover the installation and insurance costs for the first, life-size trial Troy estimates he’ll need $300,000 from private investors and kickstarter contributors. 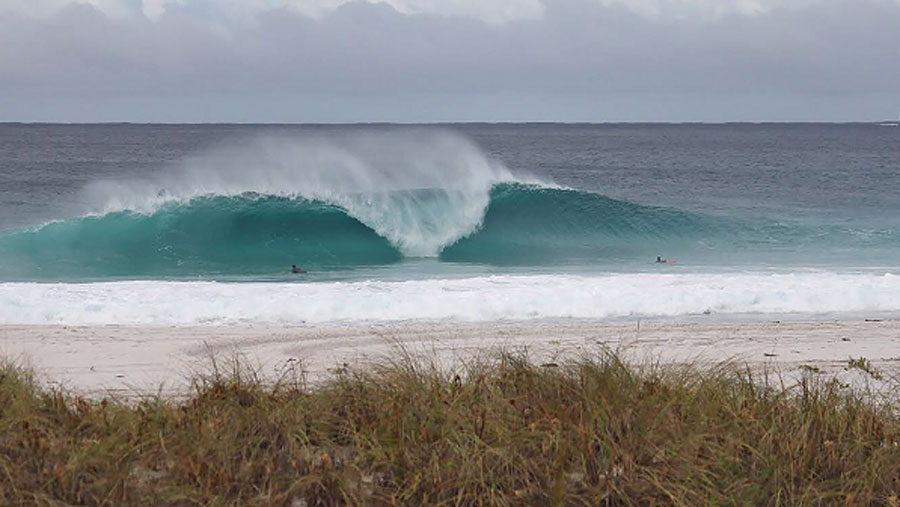 Many board riders have watched the space race to build the perfect wavepool. The WSL has already hosted a major event at The Surf Ranch, the Californian wavepool designed by Kelly Slater. Another wavepool incarnation in Waco Texas has been endorsed by several of the world’s best surfers. Meanwhile, in Australia there’s much anticipation about the scheduled opening of two different wavepool designs in Melbourne (The Wave Garden) and Rockhampton (Surf Lakes). However, the wavepools are expensive to build and operate. They also eliminate the sense of freedom derived from being in the ocean.

Australia – and the rest of the world – has thousands of kilometres of coastline where there’s an abundance of swell but the waves lack form and shape. They’re closeouts. If proven to work, there’s no reason why multiple Airwaves couldn’t be installed on appropriate sections of coast around Australia, transforming long stretches of beach into surfing wonderlands, almost like building theme parks or surf fields (instead of ski fields) for surfers.

For surfers around the world the bold, bathtub dreams of one Western Australian electrician could prove life-changing. If Troy Bottegal’s kickstarter campaign is successful and the first trial of the Airwave is installed next year at Bunbury, anyone who’s ever dreamed of riding a perfect wave will be watching very closely.